Report shows that Coaldale spends less and takes in less compared to its peers and neighbours.

On June 23, the Town of Coaldale officially released its 2021 Comparative Analysis which compares Coaldale’s operational and financial performance to the operational and financial performances of eight other similarly sized and/or neighbouring municipalities (Blackfalds, Taber, Innisfail, Edson, Drumheller, Ponoka, Lethbridge, and Lethbridge County).

Overall, the report shows that Coaldale is performing exceptionally well – especially when it comes to maintaining a healthy operational expenditures & revenues ratio. As the chart below reveals, when adjusted for population Coaldale has the lowest total expenditures and the second lowest total revenues among both its peer and neighbouring municipalities. 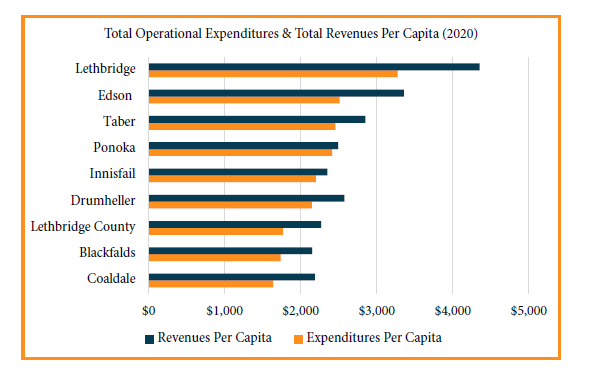 “Like shareholders, Town residents have a vested interest in knowing just how healthy or unhealthy Coaldale’s fiscal situation really is, and by comparing its financial performance to the financial performances of its peer and neighbouring municipalities, we’re able to provide them with a clearer, more comprehensive picture of our overall performance,” said Cameron Mills, Director of Growth & Investment for the Town of Coaldale. “What the results of this analysis confirm is that Coaldale continues to be quite diligent in terms of keeping its day-to-day costs down, and likewise takes in less revenue from its citizens and businesses to support those expenses. We believe this higher efficiency model is in line with what our residents expect from our operation.”

Also included in the report is an analysis of Coaldale’s expenditure-revenue ratio. In the private sector, expenditure-revenue ratios are used to make an all-encompassing assessment of a company’s overall operational efficiency. The same, however, can be done for municipalities – and on this metric, Coaldale also outperforms most of its peers and neighbours. For every dollar that Coaldale collected per person in 2020 (from taxes, fees, and other sources of revenue), it spent approximately 75 cents per person. Meanwhile, for every dollar that similarly sized Innisfail and Ponoka, for instance, collected per person in 2020, they spent 94 cents and 97 cents per person, respectively. This means that rather than spending almost everything it takes in on day-to-day operations or, worse, spending more than it takes in on day-to-day operations, Coaldale collects enough in revenues to cover day-to-day operations and has the ability to fund long term capital investments.