What is the Civic Square project?

Civic Square is a multi-use commercial office development located on Coaldale’s Main Street. In collaboration with a third-party private developer, Shift Real Estate Investments LP, this project will create, and serve as a new location for:

While construction for Phase 1 of the Civic Square project is anticipated to commence in April 2021, it will be broken down into 3 phases and is expected to take place over the next three years. 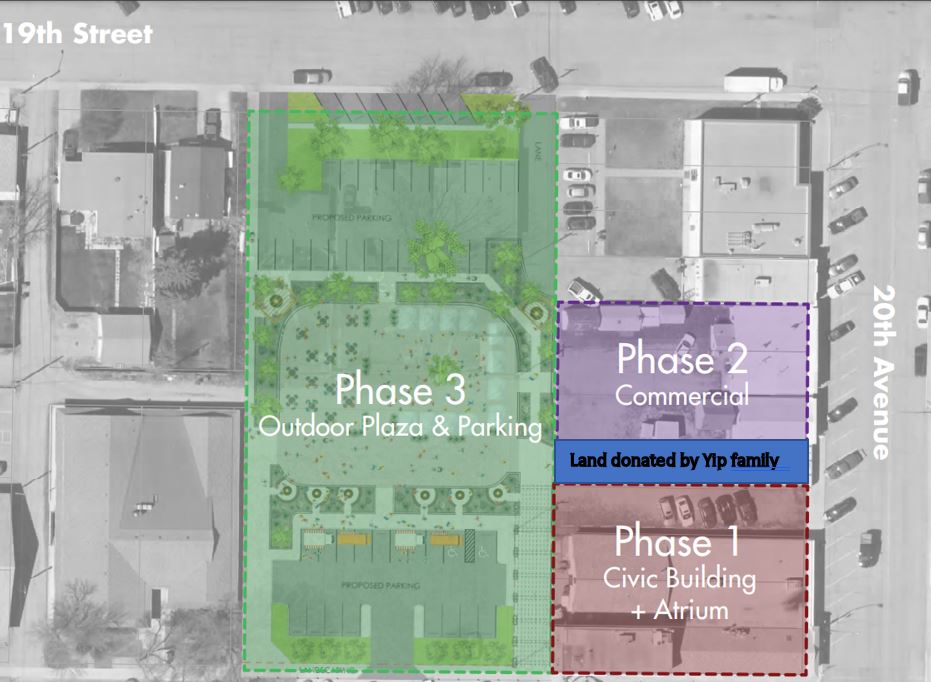 Phase 1 of the Civic Square project will see the construction of a new, two story commercial development on Coaldale’s Main Street featuring the following components:

The total cost of the spaces the Town will be acquiring within the multi-use Civic Square commercial office building will depend on decisions made throughout the detailed design process. The figures provided above, it can be said, are conservative in nature, recognizing that there will be opportunities for further cost savings down the road.

Once Phase 1 of the project is complete, the Town of Coaldale will own the administrative office space on the second floor as well as the atrium, meeting rooms and Council Chambers on the Main Floor. The Town will not be paying monthly rent to a private developer; rather, it will own its respective (‘condominiumized’) spaces outright. Although the Town will have monthly condo fees to cover common office complex expenses – like insurance and building maintenance – these are the same operating expenses the Town incurs in its existing office location, independent of the Civic Square project.

Shift Investments will retain ownership of the remainder of the commercial space within the Civic Square office building in Phase 1; from there, whether the developer chooses to lease out or sell their respective commercial condo spaces will be up to them.

Phase 2 allows for further development of up to 10,000 square feet of additional commercial space along Coaldale’s Main Street. The land for Phase Two will be purchased by Shift Investments from the Town and will be built entirely through private investment, bringing new jobs and assessment to Coaldale's downtown core.

Phase 3 of the project will see the development of outdoor space between the Coaldale Public Library and the new Civic Square building. The outdoor space will be redeveloped to function as a central community gathering space by serving as a hub for festivals, markets, and other community events while also providing parking for Coaldale’s expanding downtown.

In addition to purchasing the land upon which the former AHS site next to the library was located (for $140,000 in 2016), at different stages in 2019 the Town purchased three houses along the western boundary of the “Phase 3” project lands (along 19th Street) – in order to expand the potential of how this area could be programmed and revitalized in the future. These houses were collectively purchased by the Town for $652,000.

Shift Real Estate Investments has generously provided a financial contribution of $75,000 towards the development of the outdoor space within Phase 3 of the project as a gesture of support for the community’s continued revitalization efforts in the downtown core.

While the full scope of land required for this aspect of the Civic Square project was finalized by the Town in early 2019, the specific configuration and design of the space has not been determined. Council has provided direction that the design and programmable elements of this outdoor space be determined through future stakeholder and community engagement opportunities. Stay tuned for future updates!

Shift Real Estate - Notice of Waiver satisfaction of conditions - PLUS amending agreement - May 11, 2021