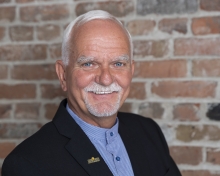 Jack Van Rijn was born in Taber, Alberta and his family farmed in the Readymade area until 1966 when they moved to Coaldale. Jack is the youngest of 18 children and the only one born in Canada. Coaldale has been his home all his life and is where his three children were raised: Lindsay, Jessie, and Cam. As ‘Coaldale’s Number 1 Fan’ (self-proclaimed) Jack has been heavily involved as a volunteer through various organizations for over 37 years to make Coaldale an even better place to work, live and play! Jack has always been a firm believer in giving back to the community and making a real difference.

He is the former co-owner of Van Rijn Electric; a business he started and ran with his brother Hank for over 35 years. Jack believes Coaldale is a great place to grow a business and strives to actively promote Coaldale businesses through the local Chamber of Commerce, with which he has been involved for the past 35 years and will continue to do so.

Committed to Coaldale, Jack’s history of volunteerism includes 33 years as an active firefighter; of which 21 years were acting as Deputy Fire Chief and 27 years as an Emergency Medical Technician for Coaldale & District Emergency Services.

As an active member of Kinsmen Club of Coaldale for 37 years, Jack helped raise over $3 million for town projects such as the Coaldale Community Centre, Kin Picnic Shelter, Skate Board Park, Spray Park, Cottonwood Estates Kinship Park, and, most recently, the Eastview Park Revitalization and the Mountain Bike Park.

Some of Jack’s hobbies include collecting antique metal toys and fire pedal cars, learning about photography and looking after his 3400 gallon Koi pond. But nothing compares to the joy he gets from spending time with his grandchildren chasing trains, exploring what Southern Alberta has to offer and other sorts of ‘shenanigans’.

Jack is extremely proud and passionate about Coaldale and helping to shape it into the ‘Gem of the West’ it is and is looking forward to the opportunity to serve as its mayor. As an agent of change, Jack hopes that public input and feedback will play a meaningful role in helping influence Council’s decision making.